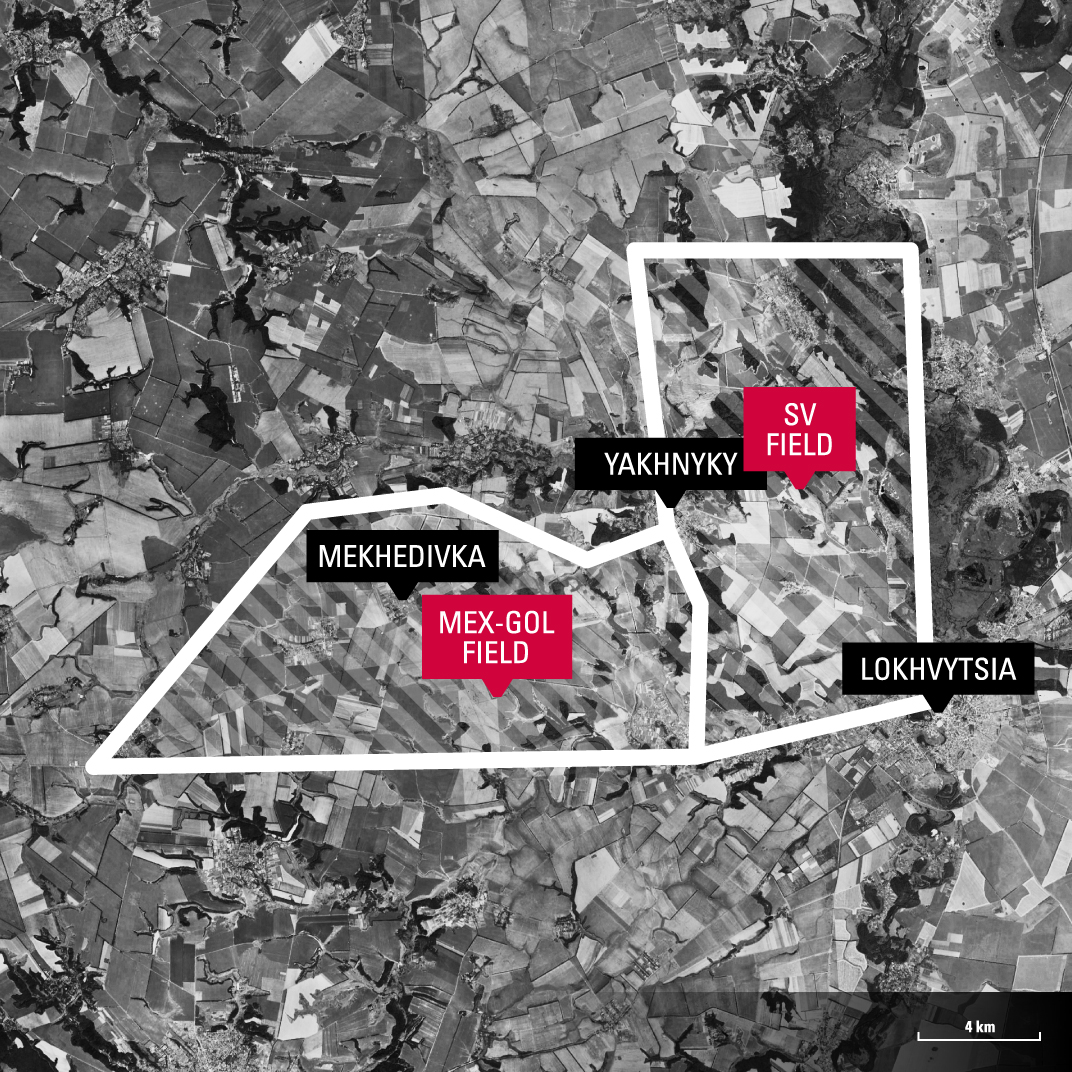 We hold a 100% working interest in and are the operator of the Mekhedivsko-Golotvshchinske (MEX-GOL) and Svyrydivske (SV) fields. The production licences for these fields were granted to the company in July 2004 for 20 years, and were extended for a further 20 years in 2020, to cover the respective economic lives of these fields as forecast in the D&M reserves assessment in 2018.

The two licences, located in Ukraine’s Poltava region, are adjacent and extend over a combined area of 269 km², approximately 200km east of Kyiv and 170km north-west of Poltava.

Geologically, the fields are located towards the middle of the Dnipro-Donets sedimentary basin which extends across the major part of north-east Ukraine. The vast majority of Ukrainian gas and condensate production comes from this basin. The reservoirs comprise a series of gently dipping Carboniferous sandstones of Visean age (“V-Sands”) inter-bedded with shales at around 4,700m below the surface, with a gross thickness of between 800 and 1,000m.

There is also a thick sequence of shale, similar sandstones that contain hydrocarbons at a depth of around 5,800m. These sands are of Tournasian age (“T-Sands”) and offer additional gas potential. Deeper sandstones of Devonian age (“D-Sands”) have also been penetrated in the fields.

In 1988 the SV field was discovered and its development was begun, while in 1990 production was launched at the MEX-GOL field.

The fields have been mapped with 3D seismic, and the geological models have been updated based on seismic reprocessing and new wells completed.

The estimated 2P reserves in the fields are 48 million boe, with 3C contingent resources of 25.3 million boe. There are also prospective geological resources of unconventional gas assessed at 2,255 million boe (recoverable – 771 million boe) by a local contractor and reviewed by the State Reserves Committee of Ukraine in 2014.

Why invest in us

In a challenging, shifting environment, only those paying attention will succeed. Disciplined performance, rigorous planning and a highly experienced team mean we’re able to operate to top quartile benchmarks in every aspect of our business. Our plan is to grow – steadily and strongly.

find out more
Back to the top